This page has created related with Enginator5000, which is a software based game engine. This part will include information about coordinate systems, cross product, planes, camera basis vectors, frustum culling etc. over time. 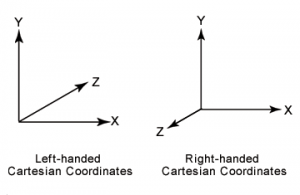 1. Use your fingers (or index finger) as the 1st vector (for examle B in BxA operation)

2. Use your palm (or middle finger) as the 2nd vector (for examle A in BxA operation)

3. Your thumb will show the direction of the resultant vector

More details (including dot product) can be found on this page.

Let’s assume we were given P0, P1, P2 points and we want to calculate A, B, C (x, y, and z of the normal) and D (distance to the origin) coefficients.

Distance between a Point and a Plane

So, as the most naïve approach, we can take all the points we have in the scene, calculate their distance to the planes, and then decide which of them will be culled.

Let’s assume one of these points is R(Rx, Ry, Rz), and we have our plane Ax + By + Cz + D with normal N. So, the distance between R and the plane is calculated as:

So, distance is simply N.dot(R) + D for any points in the scene, and the sign of the distance tells us whether the point should be culled or not.

Don’t forget, the test above should be done for all 6 planes and even if we get just a case that sign(distance) < 0, this means the point will be culled.

We need some information about camera to define frustum, and camera basis vectors to get frustum planes’ normal.

For defining near and far planes (and points on them), we need to know:

* Distance to near (dNear) and far planes (dFar)

* Ratio between the horizontal and vertical fields of view (ratio)

You can assume distance, fov, and ratio as default constant values; however, especially for real-time applications, you should keep look at and position as class members.

Before calculating basis vectors, remember, we are using right-hand rule. So, we are looking to the screen from +z to -z. Up is +y and our right is +x. So, let’s get started:

For getting basis vectors, we need make some simple calculations. The first vector we will compute is camZ = (camPos – lookAt). This is the vector pointing the opposite direction camera looks. So, this is +z direction (like our world).

For getting the second vector, we will use famous camera up vector (cameraUp). You can give any values that will work for you; however, the most famous (and useful) one is (0, 1, 0). So, now we will get the right vector (camX) of the basis vectors using camX = cameraUp x camZ (camX = cameraUp.cross(camX)) operation.

One important point to keep in my mind, all these camX, camY, camZ vectors should be normalized! And ideally, after you normalized camZ, all the other vectors will have been normalized because of cross product. You can also choose any names for these basis vector. I prefer clear names but, generally people use u, v, w to name them.